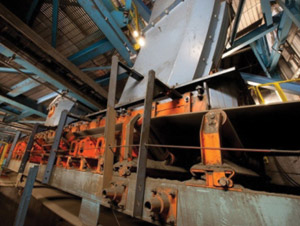 This job story demonstrates how the correct design and proper installation of a belt conveyor transfer point can prevent material from falling off the belt, eliminate unnecessary cleanup costs, and significantly reduce maintenance downtime.

An eastern Pennsylvania foundry was experiencing severe material spillage at a conveyor transfer point due to incorrect transfer-chute design, improper loading, and insufficient clearance. The problem was so severe that the task of cleaning up spillage multiple times each day while trying to keep up with other maintenance duties was significantly increasing maintenance costs and impacting employee morale. Further, when visitors, including prospective clients, toured the plant, they were subjected to dust and falling sand. By applying current best conveyor-practices, understanding human nature, and applying sound engineering practices to transfer point design, AIRMATIC embraced the relationship between safety and morale, production, and profit to solve the problem.

For years, workers at the foundry needed to position wheelbarrows under a transfer point to catch foundry-sand spillage. The wheelbarrows had to be emptied multiple times each day. The problem not only added to the workload, but also created environmental hazards and morale issues. By the time the foundry could address the problem, it was costing $32,000 per-year to clean up the spillage. Having worked with AIRMATIC on previous projects, this foundry knew the AIRMATIC would be able to solve the problem.

Upon inspection, AIRMATIC Application Specialists quickly discovered the distribution belt was loading the receiving belt too close to its tail-end. This caused belt-vibration and excessive belt-movement along the belt-line. In addition, the existing transfer chute structure was oversized for the receiving belt, causing overloading and material spillage along the length of the conveyor. Finally, without primary belt-cleaners on the distribution belt’s head pulley, foundry-sand would carryback and fall in piles of material along the entire return-run.

The first step was to remove the existing chute. Then, AIRMATIC extended the tail end of the receiving belt by four feet. Doing so allowed the tail pulley to be pushed back and away from the incoming sand. Furthermore, moving the tail pulley helped stabilize the belt line, which increased belt-life and enabled the installation of a MARTIN® Tail-Box System to prevent material spilling off the tail of the conveyor.

New chute walls installed 3/4-inch above the belt-line, according to CEMA® guidelines, and positioned so as to load material centrally on the belt, allowed the material to take on a symmetrical profile on the receiving conveyor and thereby minimize the potential for tracking problems and spillage. To eliminate belt bounce, AIRMATIC installed a wrapped, chevron-style head-pulley that maintains continuous contact with the belt to not only prevent punctures by deflecting fugitive material away, but also reduce noise by 50 dBA.

An idler conversion kit with support bars eliminated all belt sag and ensured the new MARTIN® ApronSeal™ skirting system would contain material and airborne dust where it is most prone to spillage. Finally, two primary belt-cleaners were installed at the distribution belt’s head pulley, effectively eliminating carryback.

Following these changes, the problematic transfer point now only requires standard maintenance as 99% of the material stays in the production flow. The transfer point is also one of the cleanest areas in the foundry today. Foundry management is currently exploring ways to partner with AIRMATIC to increase efficiency and improve material handling in other areas as well.

If you’re looking to streamline your operation, call us at AIRMATIC. We’ll Handle It.