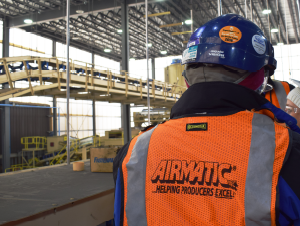 This job story showcases the value of working with dedicated, resourceful, experienced partners – especially when the stakes are high. That was the situation for a century-old Pennsylvania-based foundry after it burned to the ground in June 2018. Fortunately, no one was hurt in the fire, but the company was devastated. Over 300 employees counted on this family-owned business for their livelihood. How could they turn this around and get people back to work, while also improving their facilities?

After the devastating fire, the foundry was resolved to rebuild as quickly as possible to get their operations running and their people back to work. An AIRMATIC Account Manager was on the scene early and eager to help. But the foundry’s Maintenance Manager told the AIRMATIC Account Manager there was nothing he could do “unless you can pull conveyors out of the air.” Specifically, the Maintenance Manager was talking about 1,000 feet of conveyors that needed to be fabricated and installed as soon as possible, although there were no drawings. In fact, the design for the new building wasn’t even finished.

The Account Manager went back to AIRMATIC to consult with our Field Service Product Manager as well as experts in project management and engineering. They put together a plan to fast-track the design and build of the conveyors, despite the aggressive timeline and unknowns.

The AIRMATIC team committed to doing whatever it took to help the foundry get back up and running as soon as possible. Within a week, they had prepared a proposal and begun work. AIRMATIC would do the engineering, fabrication, and installation of the conveyors. More than 1,000 engineering drawings were involved, many of which were completed after the work they detailed had already been fabricated. Plans were made and changed daily. One conveyor alone was moved three times as the building’s design came together. Much of the AIRMATIC team worked 80-hour weeks. The push went on for months.

“Any other company would have laughed and walked away,” said AIRMATIC’s Material Handling Designer. In the process of working on the specs, the foundry’s Vice President of Operations spent a day at AIRMATIC’s facility reviewing options that would help make his new conveyors the safest, cleanest, and most efficient possible. “The AIRMATIC team ended up being among our most strategic players,” said the Operations Vice President.

When plants face challenges with bulk materials handling equipment or processes, they can count on AIRMATIC to deliver expert solutions quickly and efficiently. When the company’s future is on the line, there’s no better place to turn.

While the foundry did suffer a catastrophic event, in the process it also netted an unusual opportunity: The chance to replace more than a century’s worth of less-than-optimal processes and systems. The new facility is now poised to be the most productive foundry on the east coast.

Learn how our mechanical engineering and contracting services can solve problems in conveying, storing, and processing bulk materials.