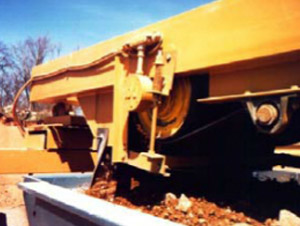 This job story shows how motorized pulleys eliminate maintenance problems in facilities that convey corrosive materials. A mushroom farm in eastern Pennsylvania mixes hay and manure to create suitable soil for mushroom growth. The soil mixture is then conveyed into bays where it sits and ages for 30 days. After aging, the soil is conveyed out of the bays and transferred onto trays to grow mushrooms.

This facility originally used shaft-mount gear reducers on its conveyors. Unfortunately, the acidic gas generated during the soil’s aging process caused them to rust and corrode. This destroyed the reducers’ bearings and seals. The corrosion caused the plant manager to replace the shaft-mount gear reducers every 6-9 months. Such short wear-life is a problem because it increases maintenance and downtime costs. Frequent repair also increased inventory costs and tied up valuable warehouse space because replacement gear reducers had to be kept in stock.

AIRMATIC Application Specialists recommended installing RULMECA® Motorized Pulleys on all portable conveyors to reduce maintenance costs and increase productivity. RULMECA Motorized Pulleys are compact, efficient, and gear-motor driven. Their hermetic seal insulates the pulley from dust, water, oil, grease, or other harmful substances. They are quick and simple to install and require virtually no maintenance. The hermetic seal prevents the corrosive gas released by urea hay manure from affecting the motorized pulleys. Making this change improved pulley wear-life to over three years. All 35 conveyors at the mushroom farm are now equipped with these safe, reliable, and effective conveyor-drive systems.

Using RULMECA Motorized Pulleys in corrosive environments makes sense because they significantly reduce maintenance and inventory costs, as well as equipment downtime. RULMECA® Motorized Pulleys also incorporate a seal system superior to that used on shaft-mount gear reducers. The hermetic seal allows equipment to last longer and perform better. Since installing the motorized pulleys on their portable conveyors, the problems previously plaguing this farm facility are no more.

If maintenance and downtime are out of control at your operation, call us at AIRMATIC. We’ll Handle It. 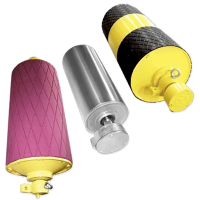